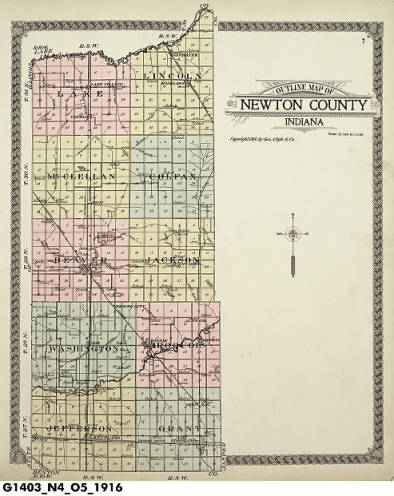 One of the most noted and far-reaching laws enacted by the legislature of 1853 was the adoption of what was known as the free banking law. Under its provisions, any person or persons depositing with the secretary of state bonds of any state in the union, were authorized to issue currency for an equal amount. …

The early settler in Newton county, though deprived of any near source of supplies, found no difficulty in finding support for himself and family. A newcomer brought with him a limited supply of flour, coffee, tea and sugar. With this stock as a basis, he found it possible to furnish his table with all he …

As this history was prepared for the members of my family and my more intimate friends, I hope I will be permitted to touch upon matters that might seem out of place in a book addressed to the general public. I was married to Adaline W. Bush at Cheviot, Ohio, then a suburb of Cincinnati, …

During the time the Indians held possession of this country, but only a short time before the whites began to crowd in on them, two of the Indians, one named Turkey Foot and the other Bull Foot, got into a fight, caused, it is said, by a drunken brawl, in which one or both were …

Although the celebrated criminal trial to which I would call attention, was held at Bunkum, across the state line, it deserves mention as a part of local history. Several of the persons actually participating in the trial afterward became citizens of Newton county. Furthermore, county and state lines did not form arbitrary divisions as they do at present. Bunkum was the center of a community of which Newton county was only a part.

in July 1827, what is now the city of Chicago was a settlement of six or seven American families, a number of half-breeds, and a few vagabond Indians. At that time the Winnebago Indians were gathering in the neighborhood of Green Bay, threatening to attack and destroy the few white settlements established along the lakes. Gurdon S. Hubbard was a resident of Chicago and the owner of trading posts, established along the Iroquois river where the towns of Middleport and Bunkum were afterward located, and also of a trading post on the Kankakee river in Newton county, afterward known as Blue Grass, near the present site of the town of Thayer.